CLICK HERE to enter the giveaways!
(after clicking, scroll down for entry form)

Posted by Tribute Books at 10:33 AM No comments:

Posted by Tribute Books at 10:32 AM No comments:

Email ThisBlogThis!Share to TwitterShare to FacebookShare to Pinterest
Labels: excerpt, richard long, the book of paul

Posted by Tribute Books at 10:30 AM No comments:

"Long's prose is deft and clear, transporting the reader from one character's psyche to the next...this tale is a compelling one. A psychological thriller for readers who are bored with run-of-the-mill horror...Those who embrace the genre will eagerly anticipate a second installment in the series."
- Kirkus Reviews

"Intelligent, self-aware, and often amusing...hitting all the markers for sadistic, salacious, and scary. Long is doubtless going to build a large and loyal fan base composed of people just like him: literate folks with a bizarre sense of humor who prefer a bucket of blood to a bath filled with rose petals."
- ForeWord Clarion Reviews

"Totally absorbing! The Book of Paul is moving, profound, funny, terrifying and never lets you go. The prose is swift and sharp...at times, even poetic. Masterful storytelling. Hats off!!"
- Henry Bean, writer/director of The Believer

"Completely outstanding...an ingenious mixture of all things intriguing! The Book of Paul is truly an enchanting tale that will leave you spellbound. I can't wait to read more of this series! The only thing I can say is...wow! Hats of to Richard Long for creating a truly worthy and delightful read."
- Close Encounters with the Night Kind

“Elegantly written and original, Richard Long's The Book of Paul…is so suspenseful and entertaining that I could not it put down, reading late into the night, wondering what the next chapter would bring. I strongly recommend it. The reader will not be disappointed.”
- James H. Cone, author of THE CROSS AND THE LYNCHING TREE

“I was greatly impressed. It is extremely hard, if not impossible, to put down.”
- Michael Rips, author of PASQUALE’S NOSE

"Twisted, outrageous, relentless -- you won't want to miss The Book of Paul."
- Greg Lichtenberg, author of PLAYING CATCH WITH MY MOTHER

Posted by Tribute Books at 10:29 AM No comments:

Email ThisBlogThis!Share to TwitterShare to FacebookShare to Pinterest
Labels: reviews, richard long, the book of paul

The Book of Paul crosses a number of genres. Sometimes when I'm asked what kind of book it is, I'll say it's a dark, paranormal thriller with occult horror themes, mystery, suspense, erotica and black humor. Other times, I just say, "It'll really curl your toes."

Written is short, titled chapters, the story is extremely cinematic. Think The Omen meets Pulp Fiction. The momentum is relentlessly driving, yet it's as much a psychological exploration as a roller coaster ride. When I write, I submerge myself in the characters. I want to feel their fears and cravings, truly inhabit them. I keep descriptive narrative to a minimum and write from multiple perspectives, which hopefully allows readers to project their own perspective and participate more directly in the experience. I want people to feel more intensely -- more afraid, more amused, more curious, perplexed, horrified, awed and aroused -- to climb inside these characters and walk down all the dark alleyways.

I've always been drawn to the scary side of the street. Science, religion and mythology are other big interests. The Book of Paul and the six volumes of sequels and prequels trace the history of Hermetic and Gnostic philosophy, alchemy, druidism and pagan mythology -- particularly the Egyptian, Greek and Celtic traditions. There's also a strong science fiction element involving quantum physics, artificial intelligence, life extension and what's known as The Singularity.

Propelled by the prophecy of a fast-approaching apocalypse, the story rides a crest of dark suspense above an undercurrent of arcane mystery. Nothing is as it seems. Very gradually, the mythological tapestry is revealed through the narrator's secret journals and the ancient codex guarded by Paul. Only as the climax approaches does he fully grasp his own significance in the labyrinth of Paul's nefarious scheme.

The Book of Paul is not for the faint-hearted. There is graphic sex, sadomasochism and gore. There are also plenty of laughs along the way, often sucker punches that ease the tension only long enough to make the revelations even more thrilling and chilling. The aim of it all? Question everything.Magic and mystery and wonder are everywhere. So are cruelty, sadness and terror.

As Hunter Thompson said, "Buy the ticket, take the ride."

For fans who sign up for my newsletter at TheBookofPaul.com, I offer exclusive content like deleted or extended chapters, previews of the forthcoming volumes in the series and other fun surprises.
Posted by Tribute Books at 10:28 AM No comments:

Email ThisBlogThis!Share to TwitterShare to FacebookShare to Pinterest
Labels: from the author, richard long, the book of paul
Home
Subscribe to: Posts (Atom)

Bio:
Richard Long writes to exorcize the demons of his past and manifest the dreams of his future. His debut novel, The Book of Paul, is a dark, thrilling, and psychologically rich supernatural horror/thriller that blends mythology, science and mystery into a page-turning addiction. Richard is also writing a YA novel, The Dream Palace, primarily so that his children can read his books. He lives in Manhattan with his wife, two amazing children and their wicked black cat, Merlin. 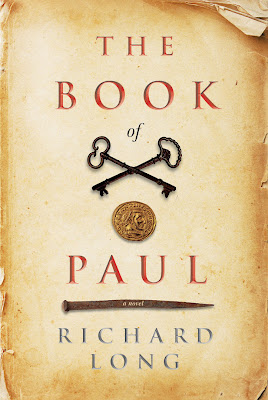 Rating: 18+ (this is not for the feint of heart, contains scenes of violence & sex)

Add The Book of Paul to your Goodreads to-read list.

Summary:
"Everything you've ever believed about yourself...about the description of reality you've clung to so stubbornly all your life...all of it...every bit of it...is an illusion."

In the rubble-strewn wasteland of Alphabet City, a squalid tenement conceals a treasure "beyond all imagining"-- an immaculately preserved, fifth century codex. The sole repository of ancient Hermetic lore, it contains the alchemical rituals for transforming thought into substance, transmuting matter at will...and attaining eternal life.

When Rose, a sex and pain addicted East Village tattoo artist has a torrid encounter with Martin, a battle-hardened loner, they discover they are unwitting pawns on opposing sides of a battle that has shaped the course of human history. At the center of the conflict is Paul, the villainous overlord of an underground feudal society, who guards the book's occult secrets in preparation for the fulfillment of an apocalyptic prophecy.

The action is relentless as Rose and Martin fight to escape Paul's clutches and Martin's destiny as the chosen recipient of Paul's sinister legacy. Science and magic, mythology and technology converge in a monumental battle where the stakes couldn't be higher: control of the ultimate power in the universe--the Maelstrom.

The Book of Paul is the first of seven volumes in a sweeping mythological narrative tracing the mystical connections between Hermes Trismegistus in ancient Egypt, Sophia, the female counterpart of Christ, and the Celtic druids of Clan Kelly.